Can UV LEDs be used to detect Barrett’s esophagus? 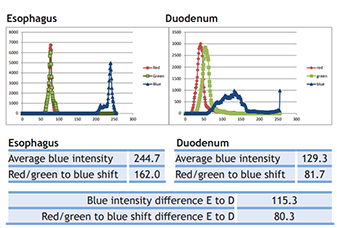 In this study, UV LEDs were used to excite tissue auto-fluorescence

Barrett’s Esophagus is a pre-cancerous condition where epithelial cells of the lower esophagus change morphology to resemble the epithelial cells of the small intestine. Early neoplasia can be difficult to detect using conventional white light endoscopy. As a first step towards real-time imaging of Barrett’s, we use UV LEDs to assess intrinsic tissue auto-fluorescence of porcine esophageal lining and duodenal lining (a surrogate for the changes seen in Barrett’s). The captured images are limited to visible wavelengths due to glass and filters on the CMOS, any UV light picked up is translated to blue. Images obtained using an Apple® iPhone® CMOS were analyzed for RGB differences.